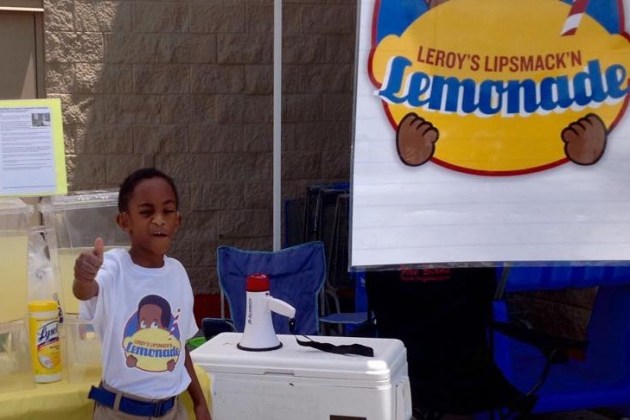 With help from his parents and Triumph Kitchen’s Sommer and Chris Wadsworth,  7-year-old Leroy Hayward may have hit upon a business that could be sustainable for years to come. As 225 Dine reports, the young entrepreneur was born two-and-a-half months early, weighing just four pounds, seven ounces. He had contracted infections at birth and was diagnosed with slow development. He has hearing loss in both ears and a facial nerve injury. However, after going through developmental programs at Our Lady of the Lake Children’s Hospital and being put on growth hormones, Hayward’s life improved. At 4 years old, he participated in Lemonade Day, creating his own stand and his own variation on the drink to raise money for a good cause. At this year’s Louisiana Lemonade Day contest, his Lipsmack’n Lemonade was named Baton Rouge’s best tasting lemonade. During the event, Hayward and his family met the Wadsworths,who were judges at the event and have helped him turn his lemonade into a business. An LLC has been created and Hayward’s lemonade stand can now be found at events such as the Baton Rouge Food Truck Wround-Up and Fête Rouge,as well as businesses such as Cupcake Allie, which features the drink as an ingredient in its lemonade cupcake.

“I would like to take the time to tell you about someone very special to Sommer and I. We met Leroy at the first round of Competition for Lemonade Day 2014 where I was a judge. To keep it short his lemonade rocked and he won. Not only was his lemonade awesome so was he and his amazing parents. Leroy was born with a number of challenges and at one point his parents were told he would not make it. Well Leroy has made it! Not only has he made it but he is an inspiration to us at almost 30 years younger. See Leroy has parents that live every day to the fullest and live like there is no tomorrow, celebrating every victory and accomplishment. Leroy and his parents show others daily that all things are possible and that we will celebrate what we have been given. I made Leroy and his parents a promise that first day I met them that we would do anything possible for them if they ever need. My wife a special needs teacher for a decade and my love of food and teaching others I was sure there was something we could do to support. Well I’m here to tell you today that you will be seeing a lot more of Leroy. See Leroy’s Lip Smack’n Lemonade may be amazing and you will get to try it but it’s bigger than that. Sommer and I will be helping Leroy and family celebrate his accomplishments through family fun, laughing, crying, branding his product and dreams, teaching similar families of potential, food therapy for his special needs, social development, celebrating through media and helping raise funds for his family and others.This little guy literally wakes up every morning and with his parents says “I am a champion, I’m a leader”. At 36 I have some things to learn from him. So please be ready to welcome Leroy and his Lip Smack’n Lemonade to the Triumph Kitchen and Wadsworth family.”